In the coming weeks I will be previewing some of the work which will be exhibited in conjunction with the  Ekphrastic Assimilations — or ecphrastic, as some would prefer — project, an exhibition at the VALA art center in Redmond, WA and symposium discussion of word-image aesthetics in China and beyond jointly held by the Seattle Asian Art Museum and Pacific Lutheran University. Here, the first instance of such an exchange to be featured on this blog, namely the poem “The Grey Painting” (2016) by my colleague Rick Barot written in response to the painting “Fugue” (2014), which is below. Its important to observe that Rick did not have the title when he wrote the poem, as the titles from all of the images have been withheld so as not to complicate the poets’ responses to the images as visual, rather than verbal, expression.

At the risk of directing, or just polluting the reading process, either of the image or of Rick’s fine poem, I will just add that what fascinates me at the moment at least about reading words and images together is the question of proximity, here expressed in Rick’s line:

You are near or you are far,

depending on the accuracy of the words I have chosen.

The “you” here can be the image for which the poem is composed, or of course any other you. The problem of being apart from that “other” is in a sense the same, a longing or even a curiosity, and often an experience startlingly deep precisely for its very remoteness, like “…the plant /  that you brush by in the dark of your / own house.” Words reaching across to an image are to my mind much like neurological events occurring in different parts of the brain. They are aware of one another in a sense, but still and forever distinct. 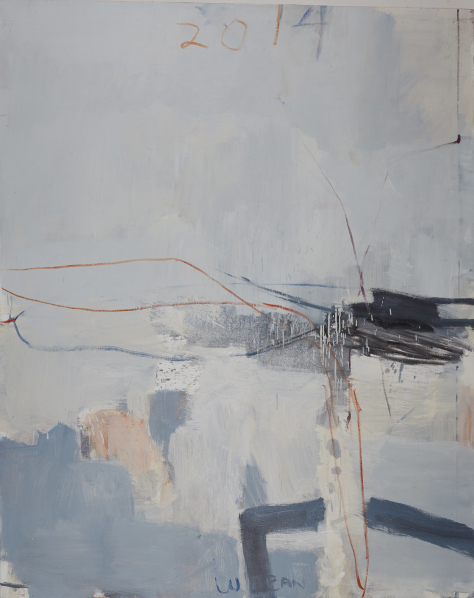 I may be looking at the gray painting

that is now in front of me, but it is you I am addressing.

You are near or you are far,

depending on the accuracy of the words I have chosen.

When my teacher told me to use this

instead of the, she was talking about the range between

the intimate and the conventional. The gray painting

is radiant, but it is a melancholy radiance.

To describe it only seems to lean away

from what I intend. Maybe, then, touch is a better way

of explaining the pleasure of that

encounter: the surprise and familiarity of the plant

that you brush past in the dark of your

own house. Or maybe the always-new logic of a dream

is closer to the truth: the falling that takes place

in a place where there is no ground. The gray painting

is there for me, a parcel with its warren

of successful rooms. One door opening to foggy roses.

Another one opening to a dawn that is the color of tea.

Surely there will always be new language

to tell you who I am, imagination rousing

out of idleness into urgency, reaching now towards you.

I keep remembering my teacher and she is an image

of joy, the small and wordless music

of her silver bangles. This over the.

One of the rules for writing the poems of a lonely person.