for those in the neighborhood, opening on Thursday night 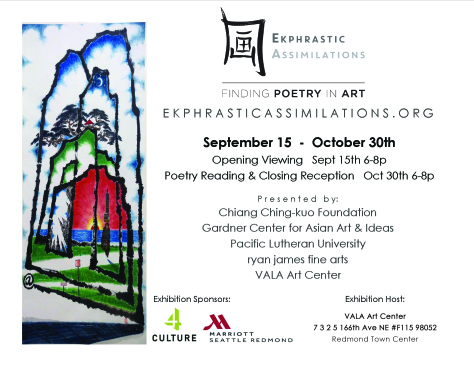 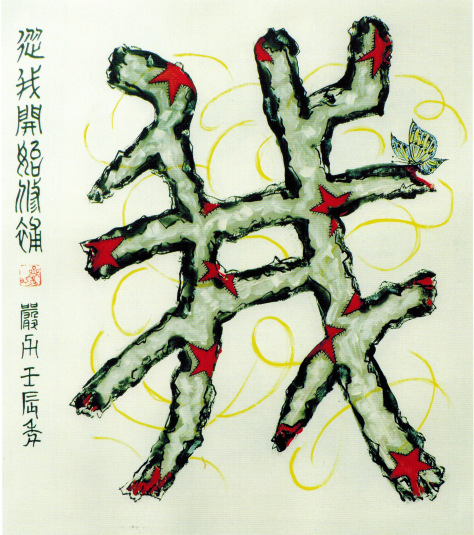 Patching Stars with Me 从我开始修补

Yan Li is in the Seattle area for the summer. He usually spends such time in New York, but is trying this side of the US mainland for a change of pace. Its slower than he used to, I believe, and this seems to have led to a more contemplative tone in some of his work, as is in evidence from these two poems, graciously translated by Denis Mair, below. I’ve added a few of Yan Li’s more subdued, though also contrasting images to fill out the picture:

Ah, quietness as if at the origin!
If I could stand there once again
I would stop throwing things recklessly
And learn from the needle hidden in my conscience
But I still doubt whether I could be
Someone whom quietness would invite

[1] This poem is untranslatable because the word “day” and the word “heaven” are the same word in Chinese. 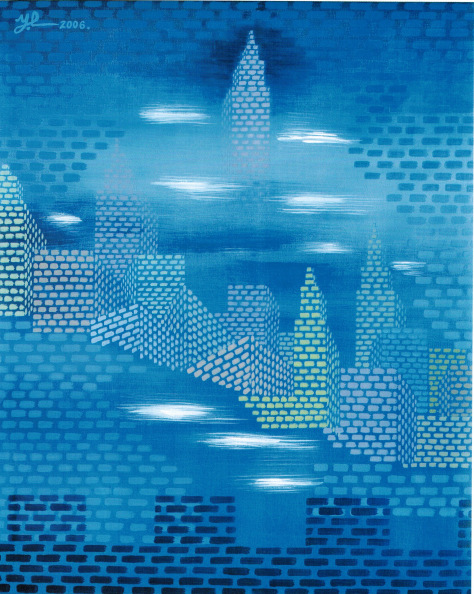 Great to see “Golden Age” and contemporary poetry mentioned in the same breath. Just wondering why only “2000 years of tradition” at Chinese poetry’s back. Would have gone for 2500 at the very least.

I heard this story in the car yesterday and found it quite interesting. I think there are probably some list members featured, too. 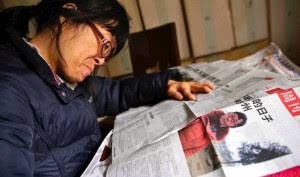 Poet Yu Xiuhua lives in her home village in China’s Hubei Province. She became an internet sensation with the publication of her poem, “Crossing Half of China to Sleep With You.” Credit: ChinaFotoPress via Getty Images

A few weeks ago in Beijing, a dozen well-known poets got together.

Among them was an IT guy who wanted their help testing out a new app for a social network — not based on sharing friends, photos or business contacts, but about sharing poetry. He convinced them to each recite some of their work.

Yibing Huang recorded his poem, “Shoulder to Shoulder We…” into an app called “Poem For You.” According to Yibing, the poets were skeptical. They weren’t “app” kind of guys. Was this really a good venue for poetry, they wondered? But, within minutes of the poets uploading their poems, he says, “there were hundreds of people ‘liking’ them and writing comments.” 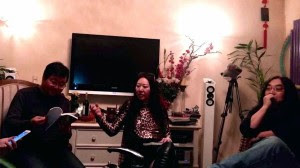 Hundreds of ‘likes’ within minutes. In the US, where poetry can feel like the exclusive domain of MFA grads and disaffected teens, I would never say to someone, “If you really want to understand America, read some modern poetry.” But in today’s China, where it seems like everyone is writing poetry, that might be just the thing to do.

“Maybe you hear a poet like Zheng Xiaoqiong, who’s going to read a poem she wrote when she was a migrant worker in Southern China,” says Jonathan Stalling, editor of Chinese Literature Today, of the scene at a typical reading. “She’ll be talking about the vulnerable bodies of her co-workers, dancing like dust in the afternoon sun, reflecting off the machinery on the factory floor. The next poet could be Luo Ying, the pen name of Huang Nubo, who’s one of the most wealthy men in China and writes poetry from the point of view of a capitalist.”

As in other spheres, the Internet has proven a huge democratizing force in the world of Chinese poetry, leveling the playing field for migrant workers and millionaires alike. But love of verse was already there. Chinese poetry has 2,000 years of tradition at its back. Parents read it to their babies. Kids study it in school. But the thing is, most Chinese believe poetry peaked in the Tang Dynasty. That ended more than 1100 years ago. So for today’s poets, their chosen art form’s exalted status can feel like a double-edged sword.

“Some people say, ‘Oh, new poetry is dead in China,’” poet Ming Di says. She loves the ancient poets, but feels the strict classical forms they pioneered tended to dead end after, you know, a few hundred years.

“Poets in the Tang Dynasty already did their best. And we in 21st Century have to do something new — either we bring something new to the old form or go our own way.”

And they are. Modern Chinese poets are exploring radical new terrain when it comes to form, sentence structure, and perhaps most importantly, subject matter. At the far end of this spectrum, according to professor Heather Inwood, is the “School of Rubbish.” (Although, she says, “you can also translate it as the ‘Trash School,’ or something like that.”) 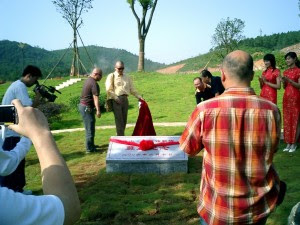 Inwood teaches Chinese cultural studies at the University of Manchester in England and is the author of “Verse Going Viral,” a book about China’s new media scenes. “The ‘School of Rubbish’ became famous for writing poems about, basically, bodily excretions,” she explains. “Their goal was to go one meter lower than the ‘lower body’ — that was the name of an earlier poetry group around the turn of the millennium that wrote about sex. So they were thinking, ‘If we can’t write about sex because that’s already been done, what can we write about that will open people’s eyes to new ways of thinking about poetry?’”

And the answer was: Poems with a toilet theme. Of course, not everyone is convinced this is a hallmark of literary progress.

“People have argued … modern or contemporary Chinese poetry has not completely found its own legitimacy,” says Yibing Huang. “Some people say, ‘Is this a poem?’ You know, ‘This morning, I woke up. I drank a cup of coffee… Life sucks.’ People say that’s not a poem because it doesn’t rhyme. It doesn’t fit a certain expectation.”

Yet, social media may be turning the tide. This past January, WeChat, a messaging and social networking app, produced an unlikely media darling whose poems don’t rhyme and don’t avoid the fact that, yeah, sometimes life sucks. Yu Xiuhua had two books come out in one week and sell out overnight — 15,000 copies.

In addition to being a poet, Yu is also a farmer from a rural village who was born with cerebral palsy. As Ming Di points out, “Some people even consider her [to be the] Emily Dickinson in China.’”

Ming has translated some of Yu Xiuhua’s poetry, including her most famous poem, “Crossing Half of China to Sleep with You.”

To spend or to be spent, what’s the difference if there is any?
Two bodies collide — the force, the flower opened by the force,
and the virtual Spring brought by the flower — nothing more than this,
and this we mistake as life restarting.
In half of China, things are happening: volcanoes
erupt, rivers run dry,
political prisoners and displaced workers are abandoned,
elk deer and red-crowned cranes get shot.
I cross the hail of bullets to sleep with you.
I press many nights into one morning to sleep with you.
I run across many of me and many of me run into one to sleep with you.
Of course I can be misguided by butterflies
and mistake praise as Spring,
and a village similar to Hengdian as home.
But all these are absolute
reasons that I spend a night with you. 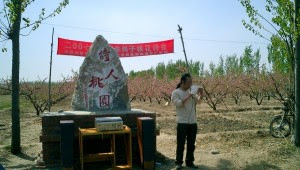 It’s hard not to feel good about social networks like WeChat if they can launch a woman like Yu Xiuhua into literary celebrity. And WeChat recently debuted a new program where every evening at 10pm it publishes a poem read by a “daily guest,” including luminaries like China’s first lady, Peng Liyuan. WeChat’s goal for the project is to help people “develop a deeper understanding of life.” Hard to imagine Twitter doing that.

Recently a popular Beijing anchor read “Shoulder to Shoulder We…” one of Yibing Huang’s poems on WeChat. Yibing is thrilled about the exposure the Internet brings him. But what is this all this doing to Chinese poetry?

“In a way I would say there is a danger in contemporary Chinese poetry,” Yibing says. “There is a kind of intellectual laziness. Taking poetry more for its entertainment value or eyeball effect.”

Social media has ensured there’s a lot more poetry out there, but Yibing argues it also makes the good stuff harder to find. How many microblog posts do you really want to scroll through to get your poetic fix? True that, but I wonder if purists are also miffed because they believe poetry is supposed be difficult — and a little out of reach. For this crowd, clickability has taken away some of poetry’s luster, and that’s unlikely to change. But as a vehicle for enjoyment, poetry has always been more unicycle than bullet train. Even the simplest poem requires a lot more of us than settling back to watch a movie.

The Internet isn’t going to kill poetry, people deciding it’s not worth that effort will. And that doesn’t seem likely to happen in China anytime soon.

‘International Research Network for Modern and Contemporary Chinese Art’ sounds like a great idea. I’m intrigued by mention of Gladston’s mention of a “closed network,” something which is closed by necessity, or choice? I can see some benefit of the the latter (selectivity leads to higher quality), but in this context perhaps open is preferable.

The final day of the ‘”Chineseness” in Contemporary Art Discourse and Practice’ symposium but not my final day in Lisbon…that’s actually today, Friday…the end of my literally worldwide research travels from Dubai to Sharjah to Hong Kong to Lisbon. So many more blog posts to come! If you missed reading the write-ups of days 1 to 3, take a look through the link here. Before I jump into the account, I just wanted to say thank you to all those involved in the symposium…from the organisers, to the delegates, to the audience members…it has been great to talk about a subject that is important to so many of us, reaffirming as such…and for 4 days, something that doesn’t happen very often as we all have such busy work-home lives. To new and old friends and colleagues…see you very soon, no doubt in another random corner of the world. I’m already looking…