That’s right, the bang-em up, smash-em up, blow-em up beauties are pervasive. Not a scientific observation, of course, but I believe I’ve seen enough now to say that something tankful is afoot (aground) in China right now. To begin with, this image: 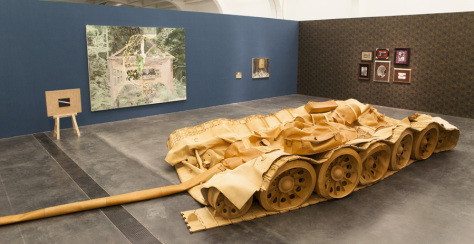 Ullens Art Centre in 798 district and aforementioned article by Evan Osnos (see my previous post), I now realize also with write-up in Economist.  And in my own encounter at 798 the other day, I encountered this sculpture:

Video version is necessary because somehow the barking dog added to the overall menace of the experience.

Following, and not but four hours after I met the dog and its guardian Tank-Child, which is to say as I was settling in to the Hainan Airlines flight back from Beijing to Seattle, I found the following image in the inflight magazine:

Not much needed to ‘unpack’ these images. China’s militarism is palpable, at least seems so to me when talking even casually with strangers, friends and family alike. Artists respond to such militarism creatively, but in so doing more or less mark the contours of its prevalence. The will to war is evident in ways very unlike those of the United States (not to mention any other country similarly set in its way). Americans go to war, destroy things and people alike in the name of (insert name), and then we do all we can to imagine its not happening. China meanwhile imagines the war to come, ever more splendidly with each iteration. These two positions, I hope, are not actually the collision course they sometimes appear to be.

3 thoughts on “Ladies and Gentlemen, I’d say we have a theme here….”