Here again working on poetry-art intersections. One interesting case in point, I think, the Chinese poet Mang Ke, one of founding members of Jintian 今天 (Today) poetry journal, and otherwise major forces in the opening up of poetic and other artistic expression in the 1970s and 1980s. Since around the year 2000, though, Mang Ke has been turning his attention more and more to oil painting, principally landscapes. For a poet towards the end of his career, particularly a career as distinguished as Mang Ke’s is, to suddenly pick up visual art is in itself an unusual event. His own explanation, in typically self-deprecatory fashion, is to suggest that he needed money to support his family, and paintings are more lucrative cultural objects than poems. Perhaps so, but one cannot detract from the rather extraordinary progress he’s made in the realm of painting in a very short space of time. Below an untitled work from 2012 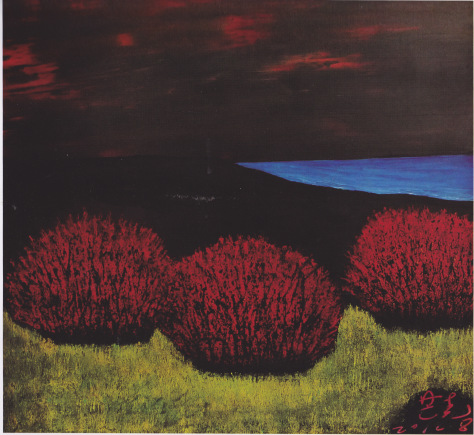 This I pair with “A Poem Presented to October”, here in translation by Gordon T. Osing and De-An Wu Swihart. The poem in context of painting is, to quote Octavio Paz something like translation, replete with “shadows and echoes”

1. The Crops
Quietly the Autumn fills my face;
I am the wiser.

2. Working
I want to be with the horses and carriages
pulling the sun into the wheat fields . . .

3. The Fruit
What lovely children,
what lovely eyes;
the sun himself is like a red apple,
beneath it the countless fantasies of children.

4. The Forest in Autumn
Nothing of your glance is here.
no sound of yours,
just a red scarf fallen by the way . . .

5. The Earth
All my feelings
have been baked by the sun.

6. Dawn
I wish you and I with one heart
could sweep away the darkness down the road.

7. The Sailboat
When that time comes
I will come back with the storm.

8. Sincerely Yours
I bring one rose-red petal of sunlight
and dedicate it to love.

Here of late my work returns to the abstract. Below two images and two poems, all by once New York-based Chin Sung (Qin Song). The first is a strikingly experimental poem (“Black Rain”) from 1950, following an image (“Black Forest”) from 1959, then an acrylic painting from 1991 (“Variations”) followed by a poem from 2000 “Notes of a Market Goer”. More on Qin’s biography, etc. in subsequent post.

Windy trysts in the wilds and eloped

In the distance thus cries of flowing water?

The resurrected sun robes itself in a red cassock 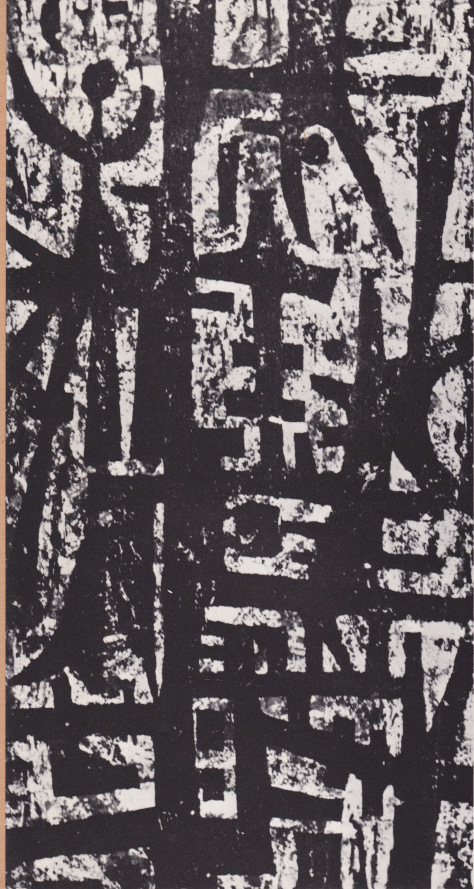 No matter Nirvana attained or not

He goes to the flea market to catch a show

A parasol a pair of rain boots some

Nirvana once attained  numerous trips to the

Performance    you catch those serendipitous

Thick red lips under a hot sun like a record album

Serendipitous joy of a market in unknown location 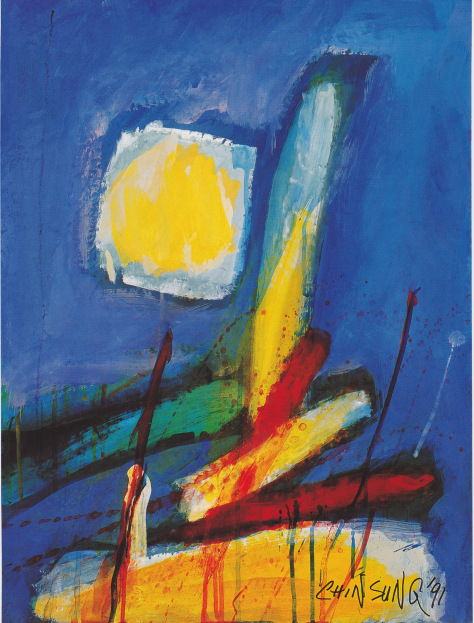 Spring time and therefore doing some spring cleaning of my hard drive (simply so that I can use it). In process I

stumbled across this painting by Yan Li: 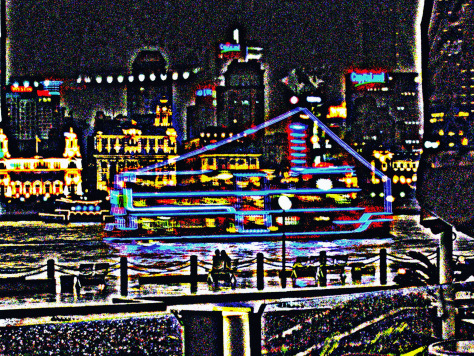 I think the painting captures well the phantasmagorical quality of night in Chinese cities, when darkness does one the favor of eliminating all the jagged edges and rebar of rapid construction, leaving behind only light and shadows of not only what is already realized, but moreover what’s fanaticized to come (this effect usually enhanced by the atmospheric effect of smog). Yan Li’s painting of the Shanghai Bund captures this very well, replete with loving couple, and historical juxtaposition of turn of then century buildings dwarfed by turn of the (next) century buildings.

And then, further along in my “locate and destroy” trip through the hard drive I came upon this image taken by me at Denver Art Museum on occasion of Zhong Biao’s 2009 exhibition EMBRACE. 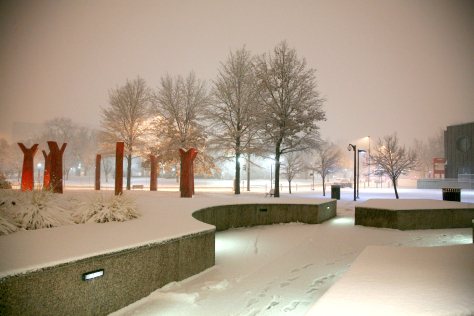 brand new snow just outside of opening of “Embrace,” a show of 17 artists including Zhong Biao in November, 2009.

I thought it might be good companion piece to Yan’s painting.

Given that so much of Zhong Biao’s art resides in the 妙 (a hard word to translate–“marvel-ful”?) of his juxtapositions, the unifying force of many of his images can be found in the title.  Zhong does not use “untitled,” which might seem a reasonable approach given the degree to which the images seem to speak for themselves.  Still, he chooses to name each one, and this process is itself worthy of note.

I think the titles can be roughly stratified into two general categories or better yet poles between which we could situate individual cases on some point of the continuum. The one side of the equation would be the relatively obvious correlation: a painting of a building entitled “building;” the other side the less obvious–a mess of strokes entitled, well, just about any—-thing.  Most of what Zhong paints resides in a comfortable grey area in-between, with titles adding something to the experience of the painting, but rarely too much.  Take, for instance, “Veil of the Road” 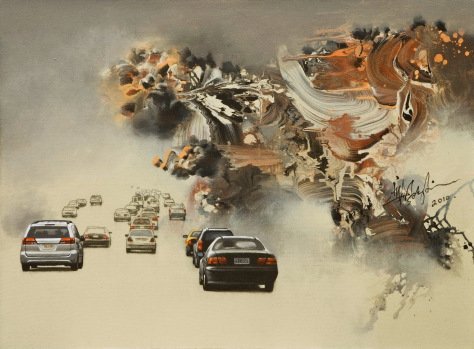 Referentially speaking, I wonder if the “veil” of this painting signifies to the blanket of pollution that covers most of China most of the time in recent decades.  Zhong Biao is certainly a student of the sky, of light, of atmosphere, and he paints the limpid blue just as he paints the grey haze, with an exacting eye.  This one, clearly, goes beyond haze, but also figures, in mad swirls, the  kind of conditions that come with breakneck speed development.

Taking the matter a step further, into completely (?) abstract,  is “Humid Season”: 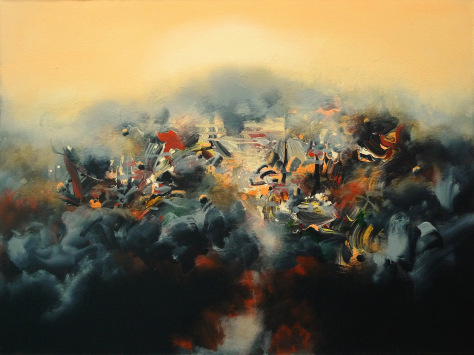 Then there are the images which seem to conform in some obvious way, but on reflection one realizes that they are at odds, pulling the image in another direction entirely. Such is the case in “Roiling Landscape” 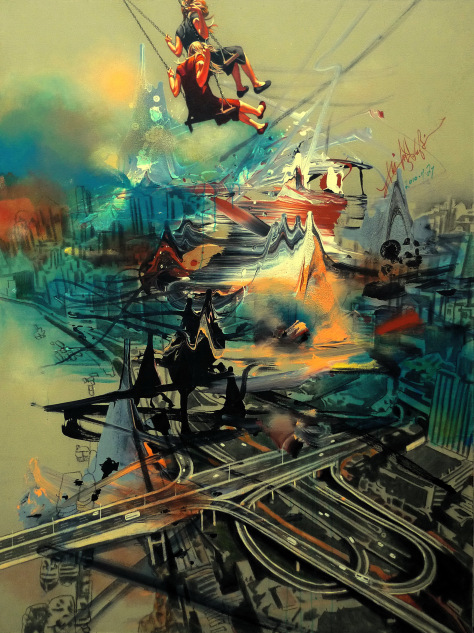 The landscape of “Roiling Landscape” is, literally in Chinese, “mountain water”, which suggests a posture vis a vis that natural environment that has a long history in China. Such a position is imbued with a philosophy, a way as well as a subject of painting.  To shift to an urban scene, a snarl of highways, buildings, is to modulate out of this philosophical position entirely. This is particularly true in the prominence of the human figures swinging above it all, figures who from the classical painting point of view rudely upset the diminished, often nearly imperceptible place humans are supposed to occupy on the landscape.

Again, this image captures China’s development beautifully.  The experience, which Zhong often paints, is not only one of flying, but one of falling, backwards, perilously perhaps.  This was the joy of the swing when we were children (not to say they can’t still be enjoyed), although part of that joy was also knowing the thing was securely fastened. In the case of Chinese urban development that may be too much to assume.  Thus, in translating 荡漾 I’ve chosen “roiling,” where something more like rippling would be more common.  I think this image is a case where Zhong’s naming, his abstractions, and his urban theme come together for maximal effect.