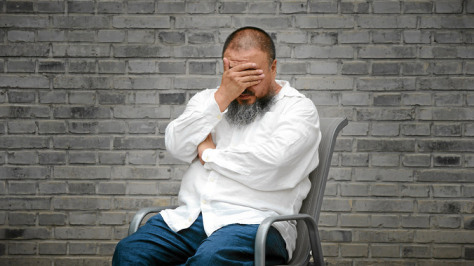 I have just discovered, courtesy of the Real Clear Arts, that Ai Weiwei will take questions from attendees of his Ontario exhibition “According to What?” in online chat format.

This exhibition began in 2009 in Mori, Japan. It was reprised this year, starting at the Hirshhorn museum, moving to Indianapolis, stopping now in Ontario en route to Miami and finally Brooklyn.

One wonders how the curators plan to approach this chat experience. Will they be moderating, perhaps even reviewing questions in advance? If so, will they be editing out overtly political content? If not, could this turn into a no-holds-barred discussion of Chinese authoritarianism, political corruption, and all other manner of potentially seditious talk? Obviously, Ai may choose not to answer if he feels line of questioning veering into unsafe territory. But from what we’ve seen of Ai already, self preservation is not the highest on his agenda.

I’m actually thinking that this is potentially a stronger position for Ai than physical presence. In recent years, in fact going back to Wenchuan earthquake project, the internet and related technologies have been key to his development. Planes, taxis, openings and meet-and-greets are all perhaps things of the past for someone as globally inflected as Ai.

Meanwhile, and on the more ponderous end of things, the works actually on display are, from what I can see on the websites, large and weighty, or, in the words of Charles Foran, “massive.” Here is a sample paragraph from his piece on Ai in Canada:

His work embraces one Chinese reality in particular – the gigantic. China has always been out-sized, from its teeming population and its continental dimensions to its massive feats of engineering, both infrastructural and social. It has always required the longest walls and biggest dams and cities that shelter 20-million residents, yet still function.

This from a relatively brief article, but excellent article that appears in The Globe and Mail.  Would that more critics willing to put finger to keyboard on the subject of Ai and his politics (and sometimes art) could be as informed as Foran.