Back at work on subject of avant garde poetry in China, both past and present. Taiwan poet, song-writer, arts organizer, sometimes painter and book maker Xia Yu (Hsia Yu 夏宇) in particular continues to strike me as one of the most contemporary writers, almost no matter what she does. Take for instance a poem from her 1990 collection Ventriloquy.

Even if the one reference to contemporary technology is one which is rapidly receding into the distance (‘printer’), the poem still seems to me to be very current and fresh. It does so by providing a string of randomly assembled things, images, and ideas and even one strictly autotelic symbol (two “meaningless” boxes). Amidst these there is significance, and I mean amidst them, in the interstitial and unspoken narratives which come to mind. Like the unconscious with which they freely “associate,” the details are at once vestiges of memory and raw material for fantasy, so well aligned that they make perfect ‘sense’ even though strictly speaking they don’t really mean anything.

Such a method carries on into Xia’s later work, particularly as she finds ways to more directly engage our screen-based experiences. In a 2007 experiment, Xia used  Macintosh’s “Sherlock” translation function to develop “poems” which were in fact random pieces of internet text that she found in English (or French, another language she speaks), ran through the translation application, and then printed on facing pages as in a bi-lingual poetry collection. Moreover, the collection, titled Pink Noise, is printed on translucent plastic, like the old transparency paper used in classrooms with a device called an “overhead projector,” something a certain generation (my own) is widely familiar with but which within a few short years, will be as foreign to young people as the vinyl record. Below is “poem” number 24 from Pink Noise, entitled: “How Soon and Unaccountably I Became Tired and Sick”

warning page, 18 and above

What better place to check out hot chicks in skimpy swimsuits

Hard as a rock just calling out to us

After playing around and a little action

On some of their rides

We decided to take the party

Back to my place.

Working backwards through Google, I discovered that his poem includes 3 disparate “origin points.” The first is Walt Whitman’s poem “When I Heard the Learn’d Astronomer,” one line of which, with minor alteration, is the poem’s alternative title.[i]  The second is a blog written by Heather L. Hunter, who, in the case of this particular entry, is giving an account of being naked and massaged in an upscale New York City spa. Hunter’s blog comprises the first three lines of the poem. Finally, we have the voice of an unnamed first-person of Welivetogether.com, a pornographic website featuring three young women who “invite” other women—usually unknown to them—to join them for lesbian sex (lines 4-11).  Taken together they are an odd assortment: Walt Whitman who is made ill by the de-humanizing rationality of science; a blogger who surprisingly (to her) enjoys the caress of her naked body by a spa employee, and finally, a by-all-appearances happy member of thoroughly documented group sex experience.

The collection, apart from the extraordinary experience of physically engaging its pages, turning them, struggling to see them, is somewhat unsatisfying, perhaps in the way much surfing the internet is. But it seems necessary to have pushed the problem of agency more or less to the limit, leaving only a shell and no “there there,” for us to fully read. During this and afterwards, of course, Xia has continued writing poetry.

[i] Whitman’s line reads: “How soon, unaccountable, I became tired and sick”

Suddenly finding ourselves in the middle of something very like mid-summer here in Pac Northwest, a winter poem by D.H> Lawrence, and my own translation into Chinese. Just for the heck of it.

Leans all alone above my window, on night’s wintry bower,

Liquid as lime-tree blossom, soft as brilliant water or rain

She shines, the first white love of my youth, passionless 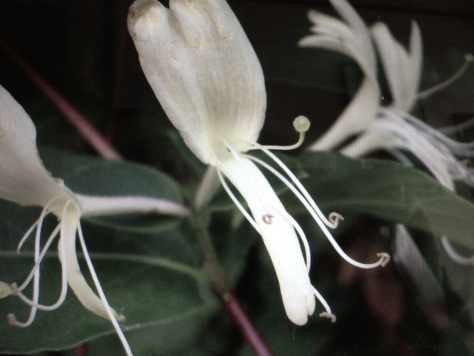 Image from Fireflies on the Grass