Zhong Biao has opened up some new vistas in his work, something which in itself is not surprising as he’s been developing and changing at least since I began following his work in 2005. This time, though, I think he’s moved in a notably new direction, call it a lateral rather than vertical innovation. Gone (at least for the moment) is the restless do-more-different style of change that drove the 2009 video installation of the Embrace! exhibition in Denver, or the 2013 ground-to-ceiling and all points in between Tailoring Clouds 裁云剪水 installation in Suzhou Art Museum. This time he has returned to oil painting, and with heightened attention, in his own words, “to the painting process itself.” This is manifest in a number of ways, including a heightened fragmentation of the image, giving his juxtapositions, both on the figural/content and abstract/figural axis, a new level of poignancy. His abstract components in particular find better ways to reside on the canvas, echoing pneuma that seem to both situate and alienate the figures they surround. The “transmigration” image is particularly deft, both building on a kind of pixelation theme which I’ve mentioned previously in this blog, but adding a watery glass-like texture at once supple and explosive. And as usual the Tibetan monastery at the center gestures towards some political content, just as it pushes that idea completely out of the image. 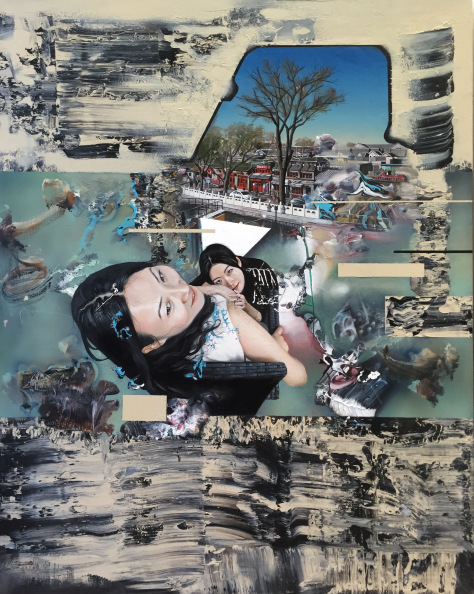 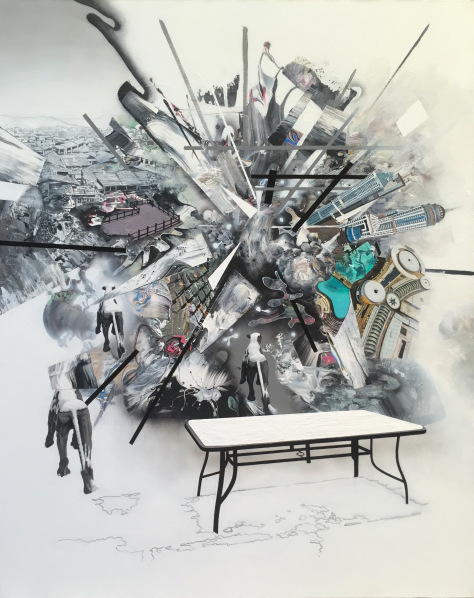