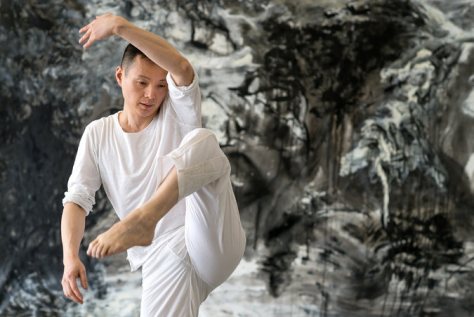 Recent report on Shen Wei in New York Times. Its nice to see Shen getting some treatment after the Beijing Olympics, where his work had what must be uncommonly broad exposure for contemporary dance. His work, as the Beijing Olympics and more recent performances clearly indicate, extends beyond dance to a sort of kinesthetic calligraphy the “remnants” of which–huge canvases painted on by bodies rather than by hands and the tools they wield–are art works in and of themselves.

I’m interested in particular because of new avenues for abstract expression which such methodologies indicate. Of course, their are echoes here of previous experiments, from body painting of yore to even specific multi-media + body hyper-textual experiences, such as Greenaway’s The Pillow Book.

But here, particularly in the form of the painting which remains after the performance, a stronger statement of the relationship between the body and the art.

One thought on “Shen Wei Dance and Art”