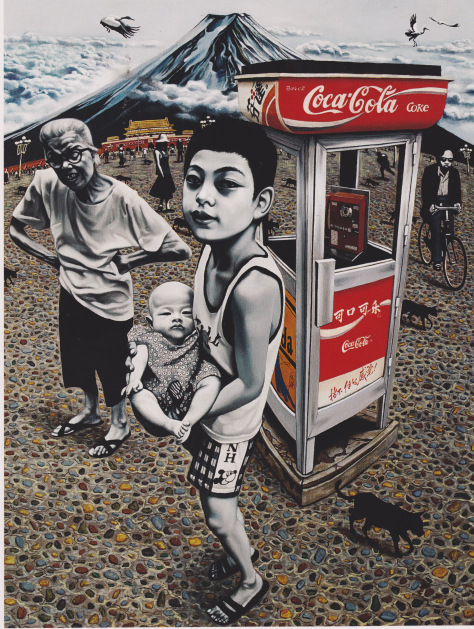 has long been one of my favorite Zhong Biao images. It is a painting from almost 20 years ago, long before Zhong shifted from oil to acrylic as paint of choice, and longer still before he started to add considerable elements of abstract imagery in his work. The painting is typical of Zhong’s hyper-realism, acutely drawn figures, personable and yet iconographic, as though this is not just any phone booth decked out in a global brand, it is this phone both, as distinctive as the autobiographical Zhong and, I am going to guess, his grandmother. Most notable, though, is the curvaceousness of the ground, suggesting the planet earth, and thus a global picture encoded with a smattering of signs, global and not.

The collapse of space-time is what I’m considering, though, when jumping to a 2010 Light Year (光年): 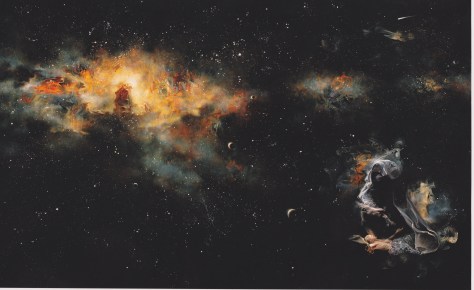 There is, I believe, considerable consistency from one to the next, only the constituent elements have shifted from landmarks of built and natural environments (Mt. Fuji, Coca-cola, the Forbidden City) to landmarks of larger space-time context, galaxies, planets, meteorites, and on down. The same coalescence of place and time, brought together through Zhong’s single lens vision which zooms in and out at once.

Putting the two images together meanwhile suggests another possibility, namely something approaching spirituality in Zhong’s work。 This is something I’ve never considered at length, but looking across works separated by decades there seems to be a more than accidental consistency to religious imagery (broadly construed). To go out a bit on an interpretative limb, in Light Year there is an impression of the Sistine Chapel, and the figure of Christ attended to by angels down right, 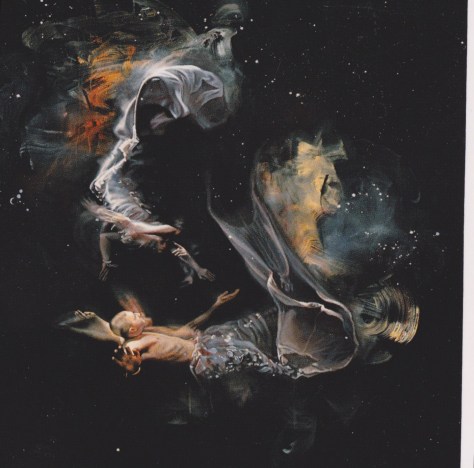 which loops back to the baby, oddly adult and somewhat surly as in early Renaissance work. Meanwhile, the title (Passerby) suggests much more Buddhist orientation, with the three generations framed by the comings and goings and the cranes, symbols of longevity. These hieratic dimensions, forming their own specific gravity of spiritual nature, take us back to the cosmic space-time of Zhong’s Light Year. In short, looking at these two, Zhong’s work appears to have changed more on the surface than on the inside.